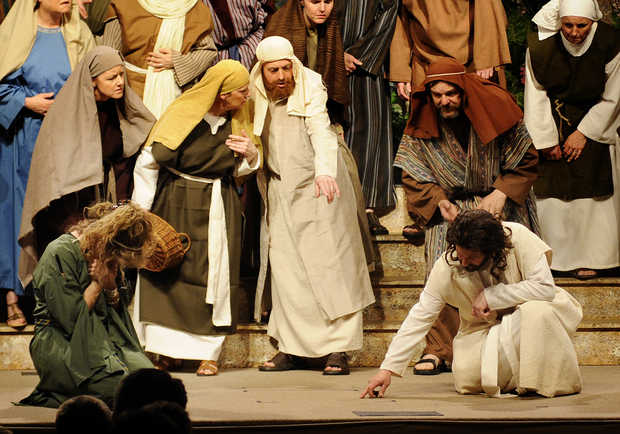 1 But Jesus went to the Mount of Olives. 2 Early in the morning He came again into the temple, and all the people were coming to Him; and He sat down and began to teach them. 3 The scribes and the Pharisees brought a woman caught in adultery, and having set her in the center of the court, 4 they said to Him, “Teacher, this woman has been caught in adultery, in the very act. 5 “Now in the Law Moses commanded us to stone such women; what then do You say?” 6 They were saying this, testing Him, so that they might have grounds for accusing Him. But Jesus stooped down and with His finger wrote on the ground.

7 But when they persisted in asking Him, He straightened up, and said to them, “He who is without sin among you, let him be the first to throw a stone at her.” 8 Again He stooped down and wrote on the ground. 9 When they heard it, they began to go out one by one, beginning with the older ones, and He was left alone, and the woman, where she was, in the center of the court. 10 Straightening up, Jesus said to her, “Woman, where are they? Did no one condemn you?” 11 She said, “No one, Lord.” And Jesus said, “I do not condemn you, either. Go. From now on sin no more.”


The account clearly depicts Jesus' approach for delivering punishment for adultery, a sin for which the 'Law of Moses' demanded punishment by death.

The adulteress had been found guilty by the Sanhedrin, and the prescribed form of punishment was stoning, 'karet', the Hebrew word which means the person was 'cut off' from the Jewish community.

Having lost their independence as a result of military conquest and being considered an occupied territory, the Jews living in Palestine were often prevented from following the dictates of Mosaic Law, so Jews were forced to use the host Nation's secular laws since they were prohibited from rendering capital punishment to other Jews.  So the Jewish community turned to the practice of shunning, a form of social ostracism employed against those who committed sins; shunning was used instead of stoning to render punishment.

Unlike stoning, shunning is NOT mentioned in the Torah or Tanakh, since it arose from a Pharisaical oral man-made tradition that arose AFTER Jesus' death, and as a DIRECT RESPONSE, an OUTGROWTH of the prohibition of stoning forced upon Jews by the secular authorities after the failed insurrections in the Roman-Jewish Wars (132 CE).

With that in mind, let's look at the example of Jesus, where he spoke to the crowd who had assembled in the court saying, "Let he who is without sin cast the first stone".

The person who would cast the first stone typically was an eyewitness to the sin, the one who had first-hand knowledge of the guilt of the accused and testified against them.  But pay close attention to his wording, for who WAS "the one without sin" present in the court who actually WAS in the position to be able to cast the first stone?  Wouldn't that be Jesus, himself?  Wasn't Jesus said to be "the one without sin", the only individual able to offer "perfect" atonement for "perfect" Adam's sin?

By phrasing it that way, Jesus was implying to Christians that although he was arguably the only member of the crowd in the position to cast the first stone, Jesus himself refused to do so.

In dramatic fashion, Jesus was denouncing the practice of stoning, refusing to participate in it.  He was challenging the conscience of the members of the crowd, and they refused to participate, as well.

So if shunning is a modern-day version of the Pharisaic 'tradition of men' that Jesus so often denounced which sprung up AFTER Jesus' death, and "perfect" Jesus refused to stone the woman, then who exactly are these "perfect" mortals within the Jehovah's Witnesses who apparently must be holier than Jesus, since they're willing to rely on man-made outgrowths of earlier man-made traditions to:

1) Disfellowship members (i.e. the elders who cast the first stone)?


And sure, the Early Christian Church leaders instituted all kinds of doctrinal policies which almost immediately violated the spirit of the powerful message which came directly from Jesus' mouth, but so what?  All anyone can dream up to justify continuing the practice of shunning is a hollow, "But that's the way we've always done it!  It's been that way for the past 50 years!" defense, i.e. an "appeal to tradition".

Didn't Jesus come to fulfill prophecies and eliminate the dictates of the Law of Moses?  Then why are some still trying to cling to old Pharisaical practices that arose AFTER Jesus' death, and are merely updated man-made versions of the stoning punishment that Jesus dismisses in the account?

It seems to me that some may need to reflect on the lesson Jesus was teaching in the account, since this is not some confusing paradoxical parable that Jesus offered: I cannot think of another lesson delivered by Jesus in the Bible which was as succinct and to the point.  If you don't get this Jesus' message, then you're not even TRYING to understand it.


(And NO, I was never disfellowshipped or disassociated, just someone who grew up in a family of Jehovah's Witnesses where a family member WAS disfellowshipped and shunned.  I witnessed firsthand how damaging it was for the individual and for the family who shunned them, and how unbecoming to Christianity the practice is, paradoxically being even more toxic to the souls of those who are willing participants in shunning, i.e. those who acted as one of the mindless members of the mob whom Jesus was addressing.)


UPDATE: I wrote and published this article in Aug 2013, a few months before the Oct 2013 Annual Meeting at which the WTBTS released the 'Revised New World Translation of the Holy Scriptures'.  The entire account of 'Jesus and the Adulteress' has been scuttled from their new Revised Bible.

I suppose that's ONE way to eliminate the contradiction: simply discard the troublesome account from the Bible as if it were yesterday's trash, and act as if a century and a half of claiming 2nd Tim 3:16 ("All scriptures are inspired by God") doesn't apply!